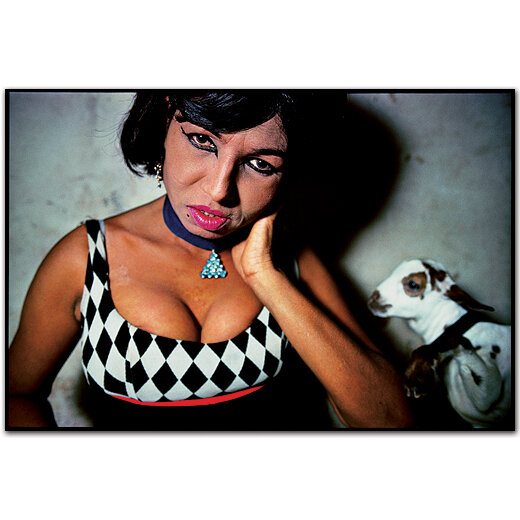 “There is nothing more extraordinary than reality”

Mary Ellen Mark is an American photographer, born in Pennsylvania in 1940. She is known for her photojournalism and her documentary photography. She photographed people showing an interest in those who were “away from mainstream society. She died in 2015 and was a member of Magnum Photos. Her work has been exhibited in the USA, received many awards.

She graduated in Fine Arts and Painting then went on to a masters degree in Photojournalism. In her twenties, she moved to New York and photographed demonstrations in opposition to the Vietnam War, the Women’s liberation movement and Transvestite culture. Her photography addressed problems such as homelessness, loneliness, drug addiction and prostitution. She was attracted to people who were outside the borders of society.

She spent time on her projects, getting to know the people she was photographing. For example, she lived for six weeks in the security ward of Oregon State Hospital and when she went to India, she lived for three months among the prostitutes of Bombay.

The book, “Falkland Road” shows a series of photographs taken in 1978 and 1979. They show the life of the prostitues of Falkland Road, a street in Bombay that is lined with wooden buildings. On the ground floor, there are cage-like structures and above these, the buildings rise. Girls ranging in age from eleven to over sixty gather, sitting in clusters on every windowsill. Mary Ellen Mark was met with hostility, the women threw garbage and water, the men would crowd around her. She had already visited before but in 1978 she decided to try to get some good photographs. It took her a long time and much resilience to be accepted. Initially, she connected with the street prostitutes, those who are independent, not inside a brothel. Then she got to know the transvestites and finally managed to stay for a few nights in Fatima’s brothel. Fatima is a madam who has three girls. The most difficult people to connect with were the cage girls, considered very low class. They suffer abuse and ridicule from the customers and other prostitutes.

Mary became very close to a madam called Saroja who accepted her in a higher class brothel on the third floor of number 12. She followed the life of the brothel and witnessed the relationships between the madam and the girls : a mix of mother/daughter and master/slave. Mary had an emotional departure, women cried farewell from their windows and some came out to shake her hand.

The photos of this project were not published in Geo because the editors said they were too explicit for the American market. Stern, the German magazine published them.

Her most famous work is her book “Streewise” which was developed in parallel to a documentary film by her husband Martin Bell. This project started out in 1983 as an assignment for Life magazine with the reporter Cherly McCall. It is about the life of street kids in Seattle. As they were driving around, they saw a group of kids by a graffiti wall. They were very suspicious of the two ladies, persuaded that they were undercover cops. Mary says that two things helped them to be accepted. The first thing was when she received a fine for jaywalking (crossing the street in a dangerous place). She stood up to the cop who gave her the ticket and the kids gathered around to watch the lady stand up to a cop. The second thing that helped was being accepted by Lulu, an influential girl in the neighbourhood. Lulu was nineteen, she was gay and had been on and off the streets since she was nine. She was constantly defending the kids, often fighting off men and women much bigger and stronger than herself.
One by one, Mary came to know each of the street kids. Once the relationship had started, the project could begin.

“My favourite thing to do is to go back, that’s how I get my pictures.”

Mary became friends with a 13 year old prostitute known as “Tiny”. She became a confidente and the central subject to this series. Tiny We learn that Tiny dreamed of a horse farm, diamonds and furs, and having ten children. Mary offered to adopt Tiny on condition she went to school. This wasn’t possible for Tiny so she stayed on the streets. Mary Ellen Mark visited her consistently till her death in 2015, photographing her and making a number of films.

The project carried on through the year, Mary Ellen and her husband Mark Bell making a film documenting the lives of these street kids.

Mary returned to Seattle with the finished film in 1984 to show the film to the street kids. It was a success, the children laughed every time they saw Lulu, and as the film went on and became more serious, the children became silent. At the end, many were in tears. As Mary tells us, at the end, one boy went up to Martin and asked “Are our lives really like this?”.

A book “Streetwise” was published in 1988, and Mary published later a book called “Tiny : streetwise revisited” which takes us from a 13 year old girl to motherhood.

We also learn that Lulu died in 1985, stabbed to death in a street fight.

In her introduction to the book Falkland Road, Mary Ellen tells us that today, no magazine would sponsor such projects. The real world in no longer seen in magazines. She says the only documentary photography we see is of war and disasters. Everything else has been replaced by fashion and celebrities. I think she has a valid point here, there is little place now for these long term, intimate projects. There is no money in this market and it is a real shame.

If you haven’t read it, I made a short article about another American photographer called Suzanne Stein who coincidentally started photography in 2015, the year Mary Ellen Mark died. The link to the article is here. This shows that documentary photography is still alive but often difficult to find in the jungle of social media.

Mary Ellen Mark published twenty one books in her career and taught photography workshops for more than 30 years.