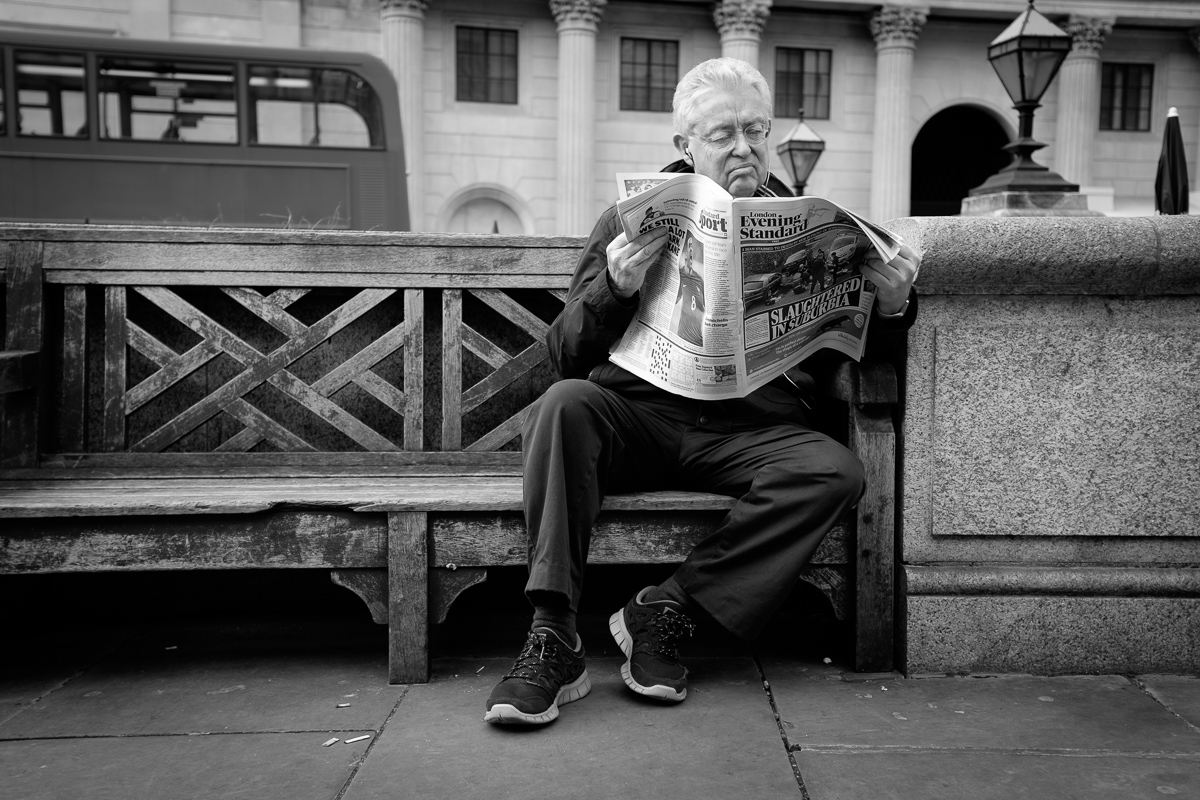 The X100T is small lightweight camera with a fixed focal length of 23mm on an aps-c sized sensor. This is equivalent to the 35mm lens on a full frame camera. The same focal length Henri Cartier Bresson used… But he had a Leica and he was a better photographer…

This doesn’t stop me from trying so here are a few street photos. As usual, I use the electronic viewfinder most of the time and I set it in black and white. I prefer looking at a scene in black and white, I see the contrasts better.

Some indoor photos first. This is taken in the British museum. The camera goes to ISO 6400 with raw files so I’m pleased to now own the x-pro2 that goes to ISO 12800.

This one was taken inside the National Gallery. I enjoy having a small camera, it is discrete and nearly silent. No one gives me a second look, except for when I take a photo (sometimes).

A photo in a small pub south of the Thames. I focused on the lady who owns the place. You’d think we were 30 years ago. The place had cats everywhere.

Now for some shots on the streets.
Who said telephone boxes were useless now?

This is Canary Wharf, I settled down in a corner, turned the exposure way down and waited for someone to appear.

Another example where I turned the exposure way down to get all the details in the highlights. The lady saw me the first time I took the photo so I went up to chat and she let me take a couple more. This is the last one I took. I like her smily bag.

Still in Canary Wharf, it is lunch time and people are lining up at regular intervals along the pavement to eat, drink and phone.

Phones are everywhere but times will change and one day these photos will look very dated.

The old shell game is still a popular scam on Tower Bridge. Photographers are not welcome. Discretion is a necessity to grab a photo.

All in all I really enjoyed using the X100T, but the x-pro2 with the 23mm f/2 lens is faster and more accurate to focus while remaining discrete and quiet.

The cover photo of this photoessay may be misleading : it is the only colour photo, and it is the only one I like as it is. The aim of this post is to show some of the potential of the Fuji X100T in architectural photography and cityscapes also prepare for my next trip by showing some of my photos and discussing their positive aspects and shortcomings. I hope to make better photos next time and I need to get my ideas sorted.

The trip I took to London was a school trip last March (Yes, I am a teacher). In my bag, I took the Fuji X100T with the two convertion lenses : the TCL-X100 turning the fixed focal equivalent 35mm lens into a 50mm and the WLC-X100, changing the equivalent 35mm lens into a 28mm. The actual focal lengths are 19mm,23mm and 33mm. I also had a little tripod : the manfrotto MTPIXI-B, a table-top tripod with an itegrated ballhead weighing only 190g. Being in a large school group with over 100 students, I had no say on the itinerary and all the shooting I did had to be quick. Well, most of it anyway…

The only photo I had time to take was while a collegue was giving a lecture and we were on the embankment opposite the Westminster. I rested the tripod on the stone wall and added a Lee Seven5 filter holder and a big Stopper (10 stops). This enabled me to get a 10 second exposure. I had time for 3 takes and this is the best one.

I don’t know if you can see but the image is very slightly blurry. There was a small breeze during the shot and I think that the square filter in front of the lens caught the wind. The little tripod is not stable enough also because it is very light and the camera is also light. One up to great big DSLRs and huge tripods! I need to do this shot again, I like the framing with the bridge, there is a small crop to get a panorama. Ideally, I’d also like a longer exposure time to blur the clouds a little more (but not too much to take the texture away). I’m thinking of carrying a bean bag to use instead of a tripod but the filter system might get in the way…

This photo is taken using the wide conversion lens. The picture quality is not visibly degraded when you add this extension to the existing lens, at least I can’t see any. Without the wide angle conversion lens on, I would have never got the dolphin statue and Tower Bridge in the frame. The sky was clear and the sun was straight in front of me so it was not an ideal time to take the picture (it was taken at 4.40pm). I think it would be better to get the sun lower in the frame and get a nice silhouette or go in the morning and have the sun light up the bridge.
When I return, I’ll also try moving to the left and placing the statue of the girl and dolphin between the towers of the bridge. With a shallow depth of field or some nice light on the statue, I may be able de detatch the foreground from the background and get a nice shot.

I took this shot with the TCL-X100 which gives me an effective focal length of 50mm. I found the 35mm focal length too wide for the framing I wanted. I like the clouds and the reflections it gives on the building but I don’t know why I left the lens open at f/2. Surely a photo at f/8 would have given a sharper result with more in focus… although it looks pretty sharp to me!

Here is a similar one at f/8 with the stardand 35mm lens of the X100T. It is underexposed by at least 3 stops to capture the shadows and tones on the building. The sky is quite dark but I find that the overall result is pleasing.

I can’t quite decide whether this is a good photo or not. I stayed a while at this spot in Canary Wharf taking photos when there were people in the glass passageway, trying to get them “just right”. I straightened up the verticals in post production. As it way a bright sunny day, I underexposed a little again to capture the details in the highlights.

This is the reflection of the Lloyds building in a curved skyscraper in the area near the Tower of London. I found it difficult to get a good composition but I think this one works.

This is a more dramatic shot of the Lloyds building using the wide angle conversion lens. This little lightweight lens is a brilliand addition to the X100T and without it I wouldn’t have got the last two shots. The streets in this area are quite narrow and it isn’t possible to change your point of view very easily. It is deliberately underexposed again to keep detail in the highlights. There are some other buildings in the corners that could be removed in photoshop but I quite like their presence here. They help close the corners and help to focus on the main subject.

Any comments and questions on these photos are welcome as this post is an auto-critique. I’ll post some more photos in the spring after my next visit and we’ll see if they are any better!